We thought we had gone glamping but it was more like camping. We pulled our camper up into my daughter’s back drive way and let the dogs out. After chasing a couple of dogs around the yard and barking incessantly at the house cat, Carl and Bee made themselves right at home.

When it was time to go to bed, my husband and I snuggled up in the bed in the camper. Because we were camping, the dogs were allowed to also sleep on the bed. Carl has a tendency to want to sleep between the two of us with his head on the pillow. Once he gets comfortable, he makes it crystal clear that we are not to try and move him.

The problem comes when he has a nightmare. Several times, he has woken up growling into the wind over something he has dreamed about. This can be very disturbing, particularly when our heads are only inches apart.  Thankfully, after only a couple of soft growls, Carl seemed to sleep through the night.

It was the next morning around 5:00 am that we realized we had an issue. Instead of the warm cozy cocoon our camper usually provides, the heater wasn’t working and the temperature ranged in the mid 30’s. Thankfully the blankets kept us warm but we found our dogs shivering on top of the covers.

An immediate need had to be met. The dogs were cold and we had the solution in our grasp. Our Heavenly Father also has the resolutions to our problems in His grasp. The difference is that we are not usually willing to wait for Him. We want solutions now and not later.

Sometimes we need to be patient for the answer to our problems and not take matters into our own hands. Sarai in the book of Genesis

had been promised by God that she would be a mother even though her child bearing days were behind her. Not willing to wait, she told her husband Abram to sleep with Hagar, her maidservant.

Abram took Hagar as his wife and she conceived a child. But instead of being happy about the situation, Hagar despised Sarai for putting her in this predicament. Sarai in return began treating her maidservant so harshly that Hagar felt she had no choice but to leave.

With no other options but to make her way back to Egypt, Hagar left the camp and made her way into the desert. I can only imagine how she felt at this point as the stars gazed down from the sky and the cold temperatures filled the air.

Hagar was probably shivering from the cold and feeling hopeless. Then something miraculous happens. Genesis 17:6 tells us that The Angel of the Lord found her by a spring. Many references in the Bible strongly suggest that this angel was a pre-incarnate of Jesus Christ.

“And the Angel of the Lord said to her: “Behold, you are with child. And you shall bear a son. You shall call his name Ishmael. Because the Lord has heard your affliction.”

After encouraging Hagar, the Angel told her to go back to Sarai and submit to her. And because she did as The Angel of the Lord commanded, she was blessed with a son in which the Arabic people have descended from.

As for Bee and Carl, we took immediate action and tucked them under our covers where they quickly warmed up. The four of us lay there nestled under the blankets until the sun came up and we were able to rush across the drive way into my daughter’s house.

I don’t know how long Carl had been shivering on top of the covers before we woke and realized the problem. But, no matter the amount of time he shook from the cold, this feeling was soon forgotten as he lay nestled in our arms.  My hope is that I can learn from Carl and also forget the shivering times and place my attention on how I am forever nestled in my Heavenly Father’s arms. 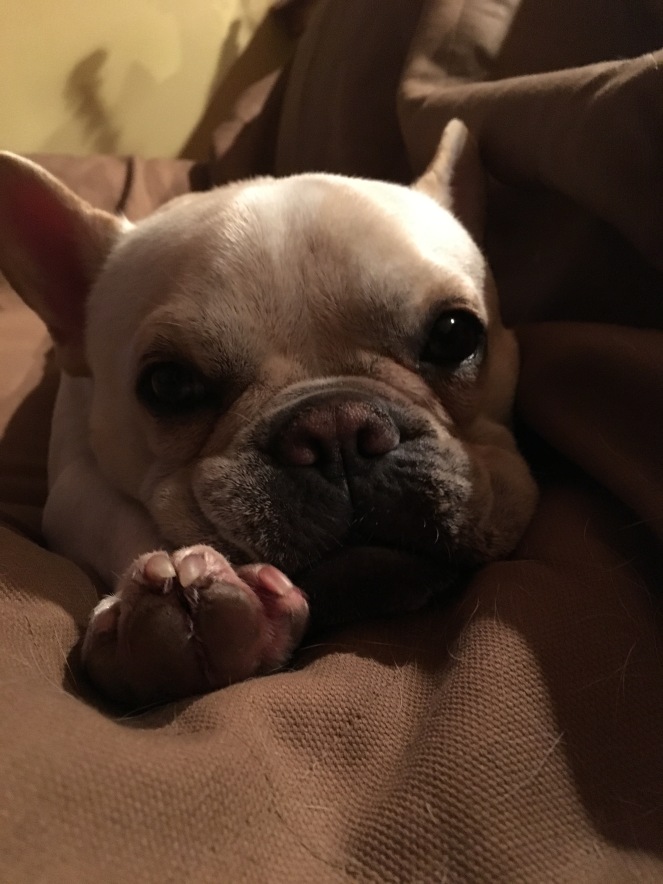 One thought on “Shivering from the Cold”