I thought something was strange the first morning when I went out onto the back porch. Carl’s treat container was turned on its side and crumbs were scattered on the table. But it was the next morning that I knew the unwelcomed guest had returned. Crumbs were all over the table and almost all of the treats were gone.

Our back porch has a doggy door for Carl and Bee to go as they please but I never would have thought that another creature would be using it on an ongoing basis. The third morning, the container was on the floor and all remnants of the treats were gone.

I would have thought that Carl or Bee would have heard the container hit the floor and gone to investigate but every night they didn’t budge from their beds.  Did they hear anything and choose to ignore it?  I could hope that Carl would become a mighty warrior and go out and defend our home from the creature of the night. 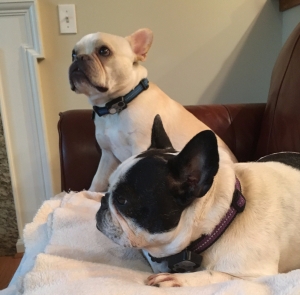 Carl is not likely going to be our mighty warrior, and from all accounts, Gideon wasn’t someone that the Israelites would have picked out to be theirs. Here was a man that was threshing wheat in a winepress to keep it hidden from his enemies. When wheat is typically threshed it is done in the open air so that the wind can separate the grain from the chaff.

When the angel of the Lord told Gideon that he was going to conquer the mass armies that had kept the Israelites in bondage for seven years, he responded by stating that he was the least of his clan and his clan was the least in their tribe. In other words, Gideon had no attributes that would be considered warrior material.

So why did God choose Gideon?  Very simple.  He wanted everyone to know that it was Him that conquered the enemy. God gave Gideon the plans and because of his obedience, Gideon would be considered a mighty warrior for the remainder of his life.

I doubt Carl will ever be considered a mighty warrior but that is okay with me. I personally am thankful that my two dogs have not put themselves in harm’s way.  As for the creature of the night, we will be bringing the treats inside and closing up the doggy door.

Any thoughts on what you think the animal is?

1 thought on “Our Mighty Warrior”