Carl didn’t realize when he plopped his body up on the red vinyl surface and made himself comfortable that he was adding to the memories that had already existed from sitting on the bold red couch.

This particular piece of furniture had been bought as a pair and first made its way into our lives when my father in law, Joe, had purchased it over a decade ago. When I first saw the pair positioned in his living area, I was a little taken back by the color.  But as time went by, I began to feel a fondness for the bold red couch.

Many kinds of memories have been created from the red couch. When Joe had been diagnosed with lung cancer and my husband and I were catapulted back into his life, many a night was spent sitting on the red couch watching an array of shows like Mash or Columbo.  But when the time came when Joe had to be moved against his wishes, I had to have one of the hardest conversations I have ever had while sitting on the red vinyl couch.

Once all of Joe’s valued possessions were selected to be moved, this piece of furniture made its way to the small sitting area that was then his new residence. Many days Joe sat on the couch as he watched his television or waved to the new neighbors that walked past his open doorway. New friends and old ones came to visit and sat on the red couch until one Friday afternoon when Joe took his last breath.

So now the couch has made its way to our garage where happier memories are being formed. Instead of memories laced with sadness, the piece of furniture is a place where people sit to watch sports on TV or grandchildren playing on scooters and bicycles. My husband even pulled it out onto the carport the day of the eclipse and called Carl to join him as they both peered into the sky. 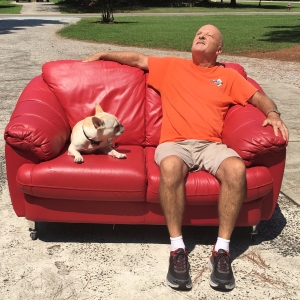 Carl has now found a place on one of the cushions to place his body when everyone finds their way into the garage. Instead of sitting on the cold floor, he jumps up and finds his place that everyone assumes has always been his.

No one knows what will ever come of the red couch. Hopefully, many more memories will be created that will extend for years to come. Time will only tell. But until the couch is taken to the dump or handed down to someone else, it will serve as a reminder of the past and point us to the future.

To learn more about my father in law, Joe, please read my book, Here We Go Joe.